As usual, logo development history should start from naming, since it is based on either the full name of the company or symbols from it. The “Rubika” name wasn’t chosen by chance, because this name reflects the whole essence and ideology of the agency.

For the name references, it was decided to consider the terminology of mathematics and geometry sciences, because the fundamental components of a quality software product – design, and programming are based on them. We mean spheres, pyramids, and cubes because these are some of the most popular figures due to their geometric characteristics – stability and shape, so pleasing to the eye.

The cube is a voluminous, deep figure that perfectly emphasizes the versatility of Rubika, which provides comprehensive services in the digital industry, where each of the faces is unique, despite its proximity to the neighboring ones. Each of the facets has a basis – a specialist in this direction, who monitors the quality of the product. The only association that comes to mind is the Rubik’s cube – a cube consisting of different colors faces, where each one consists of eight more movable squares and a static one, which determines the color of the large face.

Thus, the main facets represent the directions of our company: consultation, design, development, promotion, support, etc., and the main central squares on the edges are the symbol of the main specialists in each area who monitor the quality of the product.

Another association is Rubicon – a river, widely known due to the expression “cross the Rubicon“, meaning some irrevocable decision, which in turn indicates determination and confidence in one’s abilities.

At this stage, one of the options was chosen and we worked on it further: changed faces, fonts:

However, no matter how we twisted this “cube” – there was a feeling that everything was not right. Until one of the designers proposed another solution: a schematic display of elements in one corporate symbol – R in a square, where the square consists of brackets, square brackets that represent the program code.

It was decided to accept this option unanimously. All that was left were the colors. Blue – a symbol of intelligence and wisdom, also originates from the nikita-sp.com.ua project, which has become more serious and experienced in a new incarnation and a bit of patriotism: yellow and orange, colors match each other. 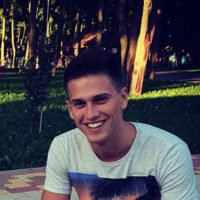 Article author: Nikita Spivak Rubika Agency CEO and founder.
Website developer since 2008, started started as a hobby, but became a work of life.

What do you pay attention to when choosing a studio?

Congratulations! Your discount code is

fill the form to assign it to yourself.